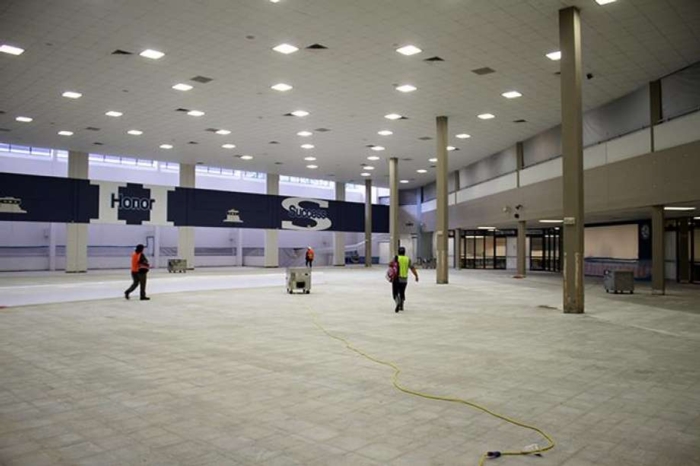 The road to recovery after Hurricane Harvey for Humble Independent School District has been challenging, long and fast-paced, Humble ISD Superintendent Elizabeth Fagen said during the Nov. 14 school board meeting.

Kingwood High School was among the district's buildings that flooded during Harvey. Summer Creek High School is sharing its campus with Kingwood.

Fagen recently announced March 19 as the date students and staff will return to the Kingwood High School campus. At Tuesday's meeting, she outlined the four options considered by the school district, and how they arrived at that decision.

Ultimately, the recommendation was made to go with the plan called "Option 1A" – a modified straight put-back, which would restore Kingwood High School to how it was prior to the flood, but would include some enhancements and mitigation measures.
Option 1 – Straight put-back

Returning Kingwood High School to exactly how it was before the flooding would cost an estimated $67.8 million, plus the contents of the building. It would be complete by the 2017-2018.

Option 1 is the fastest and least expensive option and it would allow the athletics and fine arts programs to be conducted onsite, Fagen explained. However, Option 1 does not include any flood mitigation measures.

"(We would) basically (be) agreeing that we know part of Kingwood High School is built below the flood plain and we're going to spend the money, but we're not going to actually change that," Fagen said.

Additionally, she pointed out Kingwood High School students have been attending school at the Summer Creek campus, which is the district's newest high school. Returning to the Kingwood campus as it was before would not provide the same feeling of newness they experienced at Summer Creek High School.

The modified straight put-back plan restores the school back to how it was before but would include some improvements and mitigation of future flooding at a cost of $77.8 million, plus the contents of the building.

A new competition gym would be built above the flood plain, and the old gym would be maintained as a practice gym.

"One of the items that the bond committee is considering are third gyms at all of our high schools, so this would just be having those three gyms but rearranging them so the competition gym is not below the flood plain," Fagen said.

Option 1A would also include the installation of field turf for use by the fine arts and band programs. This would avoid the destruction of the field grass, which Fagen said becomes a safety issue when the field is worn down to hard ground and dirt.

"Option 1A is just as fast as option 1. It still gets our students back on the same timeline. It does provide a new competition gym above the flood plain, turf for the fine arts and athletics so that they will have space when they return and going forward, and keeping those programs onsite," Fagen said.

The downside, she said, is the it includes some – not all – flood mitigation measures.

The first floor areas that were most flooded include the locker rooms, fine arts, gym, natatorium, auditorium, administrative offices, and special education areas.

Option 2 includes the demolition and rebuilding of those areas so they would be above the flood plain. It would be complete by the 2019-2020 school year.

"There are pros, obviously," Fagen said. "Above the flood plain is good. It's equally fast because we'd get the students back in the academic wing and they would have that sense of a new building."

The disadvantage of Option 2 is its cost, which is $135 million, plus the contents of the building.

"The other thing about this is if we were reliant on bond dollars to do it, and we would be, and if those bond dollars did not become available, it would delay reconstruction of the school back to Option 1 – six months because we wouldn't know until that happened," Fagen said.

This option would also severely limit parking space and the trees in front of the school would have to be removed to make room for an underground detention area and the creation of parking space.

"Quite a list of cons on that particular option, but something that we wanted to consider," Fagen said. "It does meet two of the criteria – one mitigation, and two that sense of a new building like Summer Creek High School."

In Option 3, students and staff would use the old building's academic wing and a new school modeled after Summer Creek would be constructed on the rest of the site.

"One of the challenges of this is the lowest area and worst flooding part is that far side where the athletic fields are, so it would have to be built up a lot, which is part of this cost," Fagen said.

The cost of Option 3 is $227 million, which is more than one-third of the $600 million that the bond package project costs are supposed to stay within.

"It would be a new school. We would have flood mitigation, but it's extremely expensive," Fagen said. "It would displace the programs for multiple years, again, we would have to bus to other facilities, and the continued disruption of the school would be until spring of 2021, so that would be our timeline for completing that project."

"Our recommendation that we presented to the board Building and Planning Committee was Option 1A," Fagen said.

She urged the bond committee to include the third gym and field turf for Kingwood High School into the bond package proposal.

"We'd like to move forward with those quickly – competition gym above flood plain. This would return our students and staff quickly by March 19. It raises the gym above the flood plain, adds some new features to the school, keeps athletics and fine arts onsite, allows them to have a full schedule, and it minimizes the disruption to the community and the staff," Fagen said.

The dollar amount of the damage to Humble ISD from Hurricane Harvey far exceeded that of other Houston area school districts, according to Fagen.

Currently, Humble ISD's Harvey-related damage is at almost $80 million from flooding and remediation and construction. That number does not yet include the cost of reconstruction on the Welcome Center.

"Over time, these numbers have gone up and that's because initially they were estimates and now we're actually getting the 'do not exceed' numbers in, and we're getting the bills, and this is where they're coming in," Fagen said.

She said Humble ISD will seek financial assistance from multiple agencies to help cover costs as much as possible, including insurance, FEMA aid, and funds from the state of Texas.

"We are going through the process," Fagen said. "We have a FEMA expert working with us. We have multiple layers of that and making sure that we're in compliance so that it is insurance and then FEMA and then the state of Texas."